Visiting Vietnam has always been a dream of mine so when I saw that I had finally been rostered a Ho Chi Minh flight I was over the moon! My best friend back in Sydney is actually Vietnamese (shout out to Lisa!) so I had heard very good things about Vietnam growing up. It was the first time most of the crew were making the trip so we did really want to make the most of our time. We booked ourselves into the earliest departing tour headed for the Mekong Delta. Tip: It’s actually cheaper to book an organised tour rather than trying to make your own way there especially if you are travelling with a large group like I did.

After a long drive from Ho Chi Minh which is the perfect opportunity for a nap, we arrived at My Tho Pier. We were all so excited because they were selling traditional conical hats called nón lá which are made out of leaves. Every single one of us including the First Officer bought one, we were quite the sight to be seen. I ended up opting for one with a pink silk band – stylish! We boarded a private boat, coconut drinks in hand and made our way to Thoi Son Island. The first stop of the day was a bee farm where we were able to sample a variety of amazing products produced by the bees. I just mustered up enough courage to hold the bees for a quick snap when suddenly before I knew it someone draped a python over my shoulders!!!! I know I am smiling in the pictures but honestly I was petrified!! Imagine if I dropped the bees, that definitely would not have been a pretty sight. 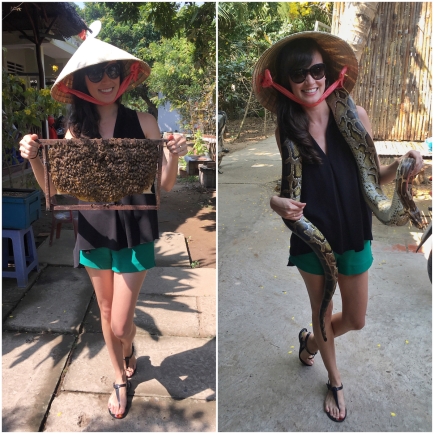 A horse and carriage ride later we finally arrived at the heart of the Mekong Delta. We set off to find our longtail boat and began cruising along the banks of the river! I was quite surprised as there was so much traffic on the river, we even had our fair share of crashes into other boats that were travelling in the opposite direction but we didn’t mind as it just added to excitement of the entire experience. We ended the day with a delicious traditional buffet lunch at a local restaurant and made the long drive back to Ho Chi Minh city. 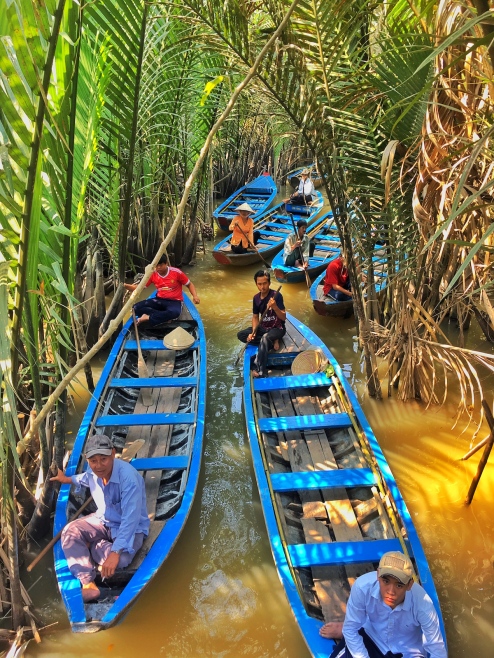 It really is the perfect layover for crew as the timing of the flight is great. You arrive into Hanoi during the evening so you are able to get a good nights sleep. Book yourself in for a tour the next morning and you will arrive back to the hotel with plenty of time to have a nap before operating the flight back to Dubai! I became very attached to my nón lá as you can see, I didn’t want to take it off. It fit perfectly into my suitcase albeit stuffed with some pyjamas and socks to retain its shape and it now sits pride of place on top of my wardrobe. If you ever do visit Vietnam make sure to get one as a souvenir!

I am hopeful that I will be rostered another Ho Chi Minh flight in the future or even be lucky enough to visit the capitol of Vietnam – Hanoi which Emirates will begin servicing August 3rd!

There was an error retrieving images from Instagram. An attempt will be remade in a few minutes.