I always love travelling to the Philippines. I have visited Manila numerous times and was lucky enough to holiday in beautiful Boracay earlier this year with my family. When I saw that I had been rostered for a Cebu I couldn’t believe my luck. I had been waiting patiently in anticipation for this flight ever since the flight was announced. I was so happy to be able to tick off another city on my list!

Most crew that travel to Cebu typically go whale shark diving but I wanted to head somewhere different that I had heard many good things about, the picturesque Kawasan Falls.

It was quite the mission to get there and we had to wake up at 2am for a 3am pickup. We were extremely lucky though, as there were only 4 of us visiting the falls it meant that there was so much extra room in the bus that we each got a row to lay down on! It was such a blessing as it was a 3 and a half hour hour drive to Badian where the falls are located. I slept the entire drive before waking up at 7am at our destination. The sun was shining and I was so excited to see the falls!

Kawasan Falls are actually located within the mountains of Barangay Matutinao so expect a short walk to reach the main waterfall from the bus drop off point. You could easily find the way yourself but our tour package included a guide who showed us the way. The walk took about 20 minutes where we encountered a whole array of animals including snakes (yes plenty of them as well!!!)

We crossed a final bridge and finally up ahead there it was – the picturesque Kawasan Falls! I was surprised as it looked just as it did in the many photos I had seen. It was beautiful. The waterfall itself is a three-stage cascading fall but the aspect that really sets it apart is the amazing crystal clear turquoise water that travels down from the mountain springs. Getting up at 2am certainly paid off because we were the very first people there! We had the entire place to ourselves I couldn’t believe it! I would definitely recommend trying to visit in the earlier hours of the morning if you want to get a shot with nobody else in it. 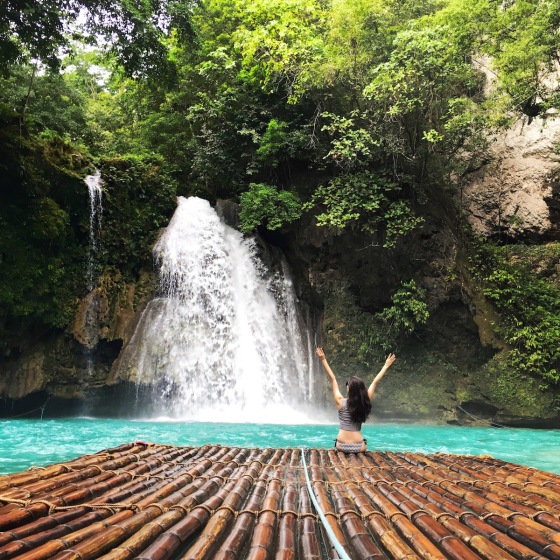 After the obligatory photo spot on the raft we all hopped on and were taken behind the waterfall itself. As we booked a tour we didn’t have to pay extra to go underneath as this was included in the package along with the guide and the driver. Our guide carefully steered us behind the cascade using just a rope for an obligatory water massage. I didn’t last very long as the water pelts down on your back as you lay on the raft. It was at this moment that I really wish I did own the iPhone7 for that waterproof factor!

Once back on the shore after our little raft ride we sat down and had a small bite to eat and a drink at the cafe located directly next to the waterfall. There is plenty of seating under umbrellas where you can enjoy lunch watching and listening to the incredible sounds of the falls.

Our guide then took us up to the top of the waterfall, they don’t advise anyone to jump from this height as it has resulted in a few deaths over the years. I would’t dare jump from that height anyway so he didn’t have anything to worry about from me! The view is lovely from that angle though if you’re brave enough to carefully teeter over the edge to snap a shot.

We kept climbing up the mountain until we reached a second waterfall. It was much smaller but still as beautiful. Again it was deserted except for one local boy who was swinging off ropes hanging from trees very much like Tarzan! We were in awe so he helped each of us climb up the rocks where we had to jump to catch hold of a rope swing to plunge into the water below. It was so much fun! 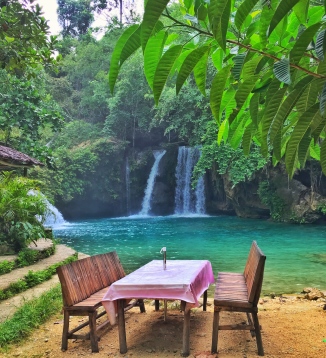 I would recommend visiting this second waterfall if the first which is the most popular gets too crowded as it is only a 15 minute uphill climb. The first one is the largest of the three, and is usually the most crowded especially if you arrive later in the day. You can also go canyoneering down the falls if you’re feeling a bit more adventurous and crave that adrenaline rush. There are many companies that provide the service in the area but you will need a bit more time as this typically lasts 5-6 hours.

On our walk back to the mini van we had a dip in a electric dam which is a small hydroelectric power plant that harnesses the energy of tthe river. It was nice way to cool off before our long drive back to Cebu. We headed back down to the mini bus where we met many locals along the way including the sweetest children. That’s what I love about the Philippines, everyone is always so welcoming and kind. There are a few souvenir and food stalls along the track so be sure to pick up a magnet, postcard or shirt to remember your visit to this beautiful place!

We were back at the hotel in Cebu by 1pm and I was so pleased with myself as I slept the entire bus journey way back as well! I have been fortunate to visit a few waterfalls around the world but this one by far was the most stunning. Here’s hoping my next adventure will be to Niagara Falls in Canada, it’s about time I check Toronto off my list!